Skip to content
Are Floss Picks Bad for the Environment? Science Says Yes.

Are Floss Picks Bad for the Environment?

You’re about to learn exactly how bad disposable floss picks are for our environment.

A former EPA scientist double-checked our research and numbers.

And when you finish reading our unique investigation…

Alternatives, like the Element floss holder, are much better for the planet.

This evidence-based article is supported by 11 sources and 6 mathematical models. Written by Artem Cheprasov and reviewed by Arik Tashie, PhD. Last updated: Apr. 26, 2022. 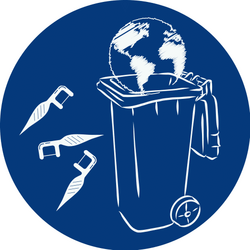 Arik is a former researcher at the U.S. Environmental Protection Agency (EPA).

He currently works as an environmental scientist (hydrologist) and data analyst. Arik graduated the University of North Carolina – Chapel Hill with a PhD in geological sciences.

He double-checked this article’s accuracy, rationale, and calculations.

This is only Part 1 of our scientific investigation into single-use flossers. 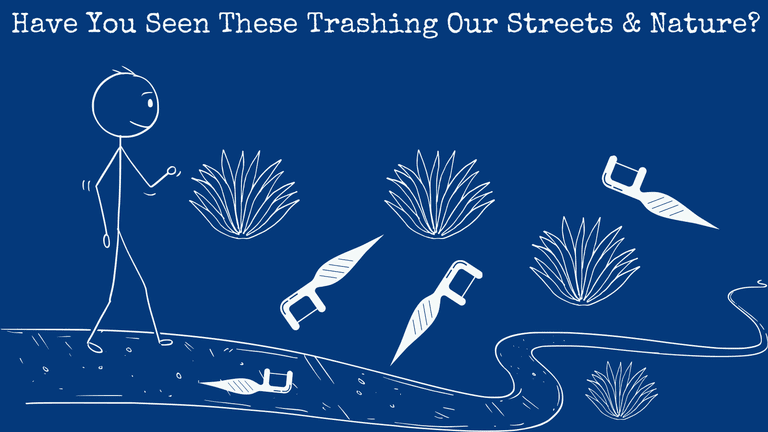 Not just the plastic ones, either.

Even the “eco-friendly” single-use flossers add stress to the environment. That’s because they, by their very design, also require an endless supply of resources to produce over and over again.

And dentists make it clear: you shouldn’t reuse disposable flossers in an attemp to be eco-friendly. It’s unhealthy.

So just how much trash do single-use flossers create, then?

Can we quantify it?

To make sure we weren’t blowing things out of proportion: 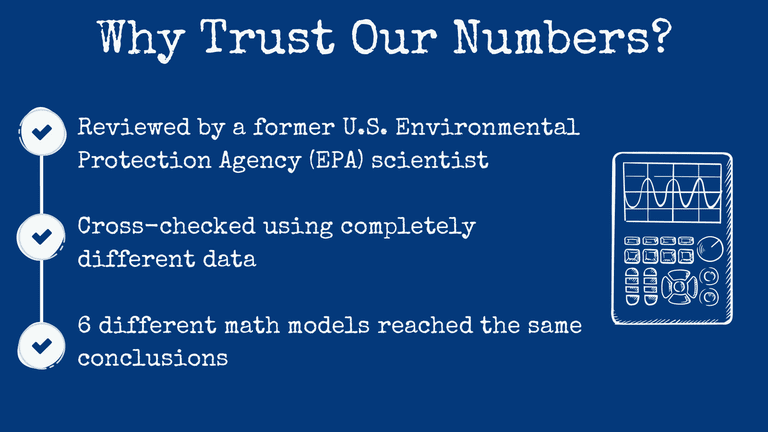 Oh, and there’s nothing to hide here.

We reveal our rationale and calculations below for everyone to…

Our ultimate aim is also clear:

To get as many people to switch to an eco-friendly floss holder like the Element.

Click or tap on the spreadsheet to enlarge it.

This spreadsheet basically sums up our calculations. For more granular insights on where all the numbers came from, keep reading.

Share the infographic below to help spread the word about these incredible results.

We went to two different famous chain stores in the U.S.

There, we found a total of 19 different packages of floss between the two stores.

Next, we cleared all of our browser data. Then we created a new browser fingerprint. And finally we connected to a U.S. server on ProtonVPN.

This was done to minimize the impact of profiling on search results.

Then we went on Amazon.com…

Typed in “disposable flossers” without quotes…

And marked down the prices of the first 21 packages of flossers that came up in the search results. So long as they weren’t the same ones that we saw at the retail stores, that is.

We calculated the average retail cost among them. 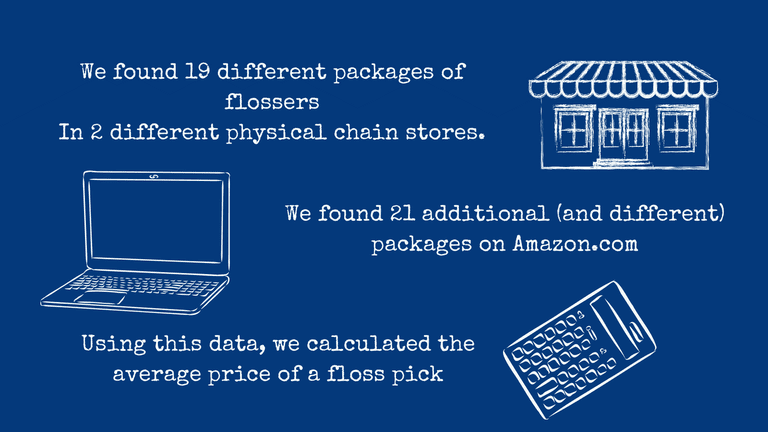 Just to be clear:

This was the pre-tax, undiscounted, no shipping fee cost.

After all, we can’t account for the infinite number of tax situations, temporary discounts, and shipping fee combinations.

Since each package contained a different amount of flossers, we calculated all of our numbers per 100 flossers.

The low end was typically composed of bulk purchases of generic plastic flossers.

The average retail (pre-tax) cost of 100 single-use flossers came out to be:

The median (middle) cost was:

Indicating a skew caused by the higher-priced ones.

We used the median price in our calculations as we assumed that most people don’t buy the super expensive disposable floss picks.

If we excluded the two most/least expensive outliers, then the average price would be much closer to the median mentioned before. The same would happen if we remove all data points greater/lesser than one standard deviation away from the mean.

Using a digital scale we tared, we weighed a wide variety of single-use floss picks in their retail packaging. After all, the retail packaging is part of the trash weight.

The average trash weight per 100 disposable flossers, including retail packaging, was:

However, we decided to be conservative and round down to: 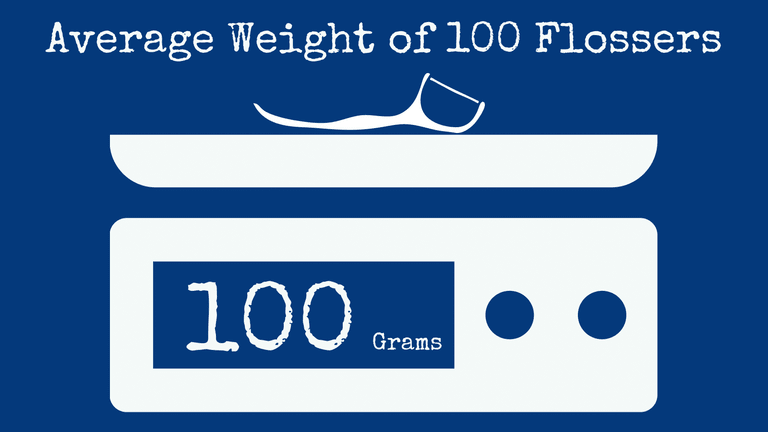 In the end, this choice minimizes the impact disposable floss picks have on the environment.

But we think that many readers will appreciate our hesitancy to potentially blow things out of proportion.

Do you neatly stack all of your trash in your bags and bins such that there’s no empty space between the items in the trash?

That empty space is, therefore, part and parcel of the volume of space that your trash takes up.

You’ve probably noticed that single-use flossers most often come in a bag.

In that case, the bag appears slim.

Other times the flossers are all over the place.

Once again, we believe that the reality is that most people don’t neatly stack their flossers in the trash bin. Accounting for the empty space these flossers naturally create around them reflects this reality.

So we randomly tossed flossers into their retail packaging and calculated out the volume of space they took up.

But we can put that into better perspective.

Do you think that 100 of those single-use flossers can fit into 3.5 coffee mugs?

Doesn’t sound unreasonable now, does it?

According to the U.S. Centers for Disease Control and Prevention (CDC):

The average measured weight of an American adult aged 20 and over is approximately:

For ease of calculation, we assumed this population is roughly half male and half female and that the data for 18/19 year olds isn’t terribly different.

But a lot of people are intuitively familiar with the size of a recycling bin.

So we decided to use the size of recycling bins as a way to put the volume of trash flossers create into better perspective.

The typical curbside recycling bin volume in the U.S. is about:

Using the information from AMR…

And after clarifying their numbers via a chat with them…

We estimated the following:

The global revenue from floss picks in 2020 was about:

Two-fifths of this revenue came from North America:

Four-fifths came from single-use flossers, as opposed to reusable ones.

The revenue from disposable flossers in North America was roughly:

The data we had to work with was limited.

We didn’t think it would be wise to provide a point estimate (a single number) for our conclusions.

We assumed that the true environmental impact of single-use floss picks was upwards of 50% lower/higher than our calculated average.

It was an arbitrary decision.

But we felt it was generous enough to account for known unknowns.

Here’s an example of how that works.

We calculated that the total weight of the trash created by single-use flossers in North America in 2020 was:

The 50% higher/lower range is therefore 2347 – 7042 metric tons, the range wherein we believe the true number lies.

You now have all the information that you need to see how we performed our calculations.

We didn’t think that putting all of our faith in AMR’s data was good enough.

So we performed a cross-check with very different types of data.

We found that the population of the U.S. currently stands at about:

Based on two studies:

We then had to figure out how many of these Americans use disposable floss picks as opposed to other methods, like a reusable flosser or just floss.

We couldn’t find any good info on this.

To be very conservative we said:

Only 10% of Americans who floss at least once a day typically do so with a disposable flosser.

Our experience tells us this is an underestimation but we can’t prove it with hard data.

Yet if we look solely at the amount and wide variety of single-use floss picks in major retail stores, compared to that of packs of regular floss, 10% seems awfully low. It appears that a huge proportion of people are being catered to with all those choices.

With all of that in mind, we had enough info to crunch the numbers.

Recall that our estimated range from before was:

Our cross-check shows that the U.S. produces:

3415 metric tons of disposable flosser trash every year. This falls squarely into our estimated range.

Logically, the cross-check value would rise had we included Canada and Mexico in our calculations.

While 3415 metric tons of disposable flosser trash every year seems high…it’s because it is.

Of course, some people may think that this number is so high that it’s probably wrong.

But if we put things into context:

Then 3415 metric tons is tiny compared to the total trash the U.S. produces on a yearly basis.

In terms of only municipal solid waste, the U.S. produces:

This means ~0.001% of all the municipal trash in the U.S. is caused by single-use floss picks.

In every 100,000 pounds of garbage there’s 1 pound of disposable floss picks.

This isn’t to minimize the waste single-use flossers create.

We estimate that around 2.3 – 7 billion flossers are dumped in North America.

About 3.4 billion single-use flossers are trashed in the U.S. alone.

Are floss picks bad for the environment?

Our research makes it abundantly clear.

Now we finally know just how bad they are.

12 Ways We May Have Underestimated the Ecological Impact

The data we worked with was imperfect.

So we tried to be conservative as much as possible.

We may have underestimated the true environmental cost of disposable flossers by an unknown amount.

Ways We May Have Overestimated the Ecological Impact

Due to a lack of good data we may have overestimated the true environmental cost of single-use floss picks by an unknown amount. Here’s why:

Due to a lack of good data, we’re unsure of how some factors may influence the true environmental cost of disposable floss picks:

Dr. Tashie brought up numerous alternative models that can be used to estimate the environmental impact of single-use floss picks using the data sourced herein.

For brevity’s sake, this article presented only our model.

Other models can rely on slightly different calculations. For example, you could use the mean vs. median, 95% confidence intervals vs. “Bayesian” uncertainty estimates, use or avoid outliers, rely on only one of the two flossing studies, and so on.

The point being: there is no one correct way to estimate the conclusions in these articles.

You might be curious as to what Dr. Tashie’s five alternative models, in between them, predicted. In summary, in the United States alone, between 2.89 – 5.26 billion disposable flossers are thrown away every year.

We want to emphasize that we are not entirely opposed to single-use floss picks.

Well, there are probably legitimate cases where these are the only (best) choice of flossing for people. For example, individuals with mobility-related concerns may not like floss or floss handles. So single-use floss picks can help them maintain good oral hygiene.

The point of this investigation isn’t to discourage everyone from using disposable flossers. It’s to encourage as many people as possible to look to reusable alternatives if they’re a viable option for them.

Single-use floss picks are bad for the environment. Our original research proves it with hard data.

Here are the 3 key takeaways from our investigation:

In the end, just say “No!” to disposable floss picks.